New Dog is currently living in the cone of shame.

I'm sorry to say, it's one of the funniest things I've ever seen.

A few days back, my wife noticed that New Dog was not being his usual get-into-everything-and-bother-everyone self. While I took this as a good thing, she correctly recognized that it was probably meant that he wasn't feeling well and not, as I hoped, that he had finally decided to calm the heck down. We did a quick examination, and we found that one of the toenails on his back foot was split, not vertically, but horizontally.

Clearly, the foot was bothering him, so we did our best to clean it out, which was not his favorite thing to ever happen, and decided to keep an eye on it. This medical theory came, in no small part, from being a runner. When you've got a bloody toenail, it'll either get better or fall off, and the only way you find out which is by waiting a few days.

The difference, of course, is that we don't run our toenails through the dirt and have to spend all our time on those nails. After a couple days, the situation seemed to be getting worse instead of better, so we headed to the vet. Our only option, it turned out, was to get the whole thing removed. Feel free to take a minute to shudder that one out. Because of the nature of the split, they had to knock the pup out with a little anesthetic, and then take it off. After that, they wrapped his little foot, woke him up, and sent us home with antibiotics, pain meds, and a cone of shame. 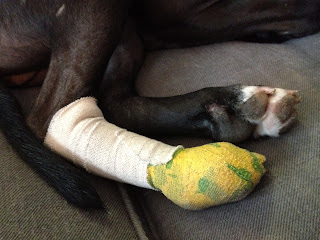 All of this happened yesterday, and we've spent the last twenty-four hours doing our best to make New Dog's unhappy situation better. We bought wet food for him (that serves to hide his pills), and he even got to sleep on the couch last night, since the size of the cone made it impossible for him to turn around in his crate. My wife takes amazing care of these dogs, and she has been nothing short of incredible during his period on the DL.

Which makes me feel like that much more of a jackass for laughing every time something goes wrong with the cone. But I'm sorry, it's funny. The pup has spent most of the last 24 hours like this: 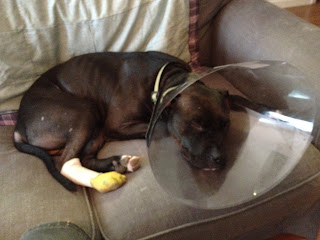 As you can see, the cone is clear, which helps keep him calm by not blocking his view. However, it also confuses the daylights out of him when he tries to go through a door or climb a stair. Suddenly, the far edge of his cone catches on something and he's spiraling to the ground. He's walking just fine, and his bandage comes off tonight, so I'm sure he's not in any pain at this point. He's just genuinely confused as to why every doorway seems narrower than before. We've had to go to great lengths to get him to drink water for some reason, and one way we do that is by giving him ice cubes. The problem is that he drops them, and then lowers his head to get them off the floor, only to be stopped by the cone. It looks like he's gotten stuck in a fishbowl.

It's comedy, okay? Sad and at times a little pathetic, but comedy. We're giving him lots of treats and taking good care of him, but I'm afraid it's going to be a long week for him in his tiny plastic prison. We'll just get through it one absurd moment at a time.

After all, laughter is the best medicine.
Posted by Jalex at 2:25 PM