Turns out I was wrong.

I can, in fact, resist the offer to go running with two legends of the sport. All it took to convince me otherwise were 16 miles, two needy puppies and one ugly weather report.

In order to avoid a lot of traffic related to tomorrow's Livestrong Austin Marathon, my weekend running partner and I decided to move our run to Saturday. Unfortunately, he had a conflict come up, which meant that the runs this weekend were up to me. After many changes in my plan, I decided on the following: Saturday morning would be my long run (as usual) after which I would cool down with the run around the lake. Sunday will be a short run by myself before loading the pups in the car and heading to the marathon course for a bit of cheering.

My long run turned out to be a little more adventurous than I expected. I got up super early in order to get it completed early enough to do everything else I had planned, so at around 5:30, I was out the door. Forty minutes in, I saw the first flash of lightning on the horizon. Ten minutes later came the first roll of thunder.

I knew the rain would be moving in and out of the area all day, so I decided to stay the course. At around 65 minutes, the skies opened. I haven't run through rain like that since early last year, and I chose to enjoy it, with one little moment of caution: I ducked into a 7-11 to get a plastic bag in which to wrap my phone. Just in case. Then it was right back out into the rain, dodging rapidly growing puddles and miniature mudslides every few feet.

My speed was intentionally slower than usual. The one thing I wanted more than anything else today was to run continuously for the whole 16 miles. The most vital part of marathon training is teaching the body to work continuously for hours at a time. As I turned back up the hill, the rain stopped, but my feet were sliding in my soaking wet shoes, which made the whole process a lot more of a challenge. At around mile 14, my legs felt tight and weak, but I knew I was going to finish. I made it the entire way with only a few stops for traffic lights (and plastic bags), and none lasting more than a few seconds. I feel like I am really on my way to a PR this June.

So I made it home, a little later than intended, and fed the dogs. The plan was to let them hang out for a few minutes and then head to run with these guys: 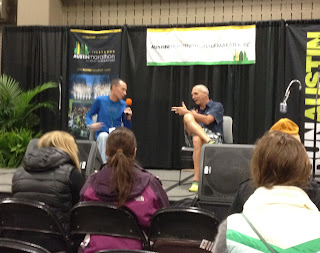 As the moments ticked off, however, I started feeling guilty about leaving the dogs at home once more: 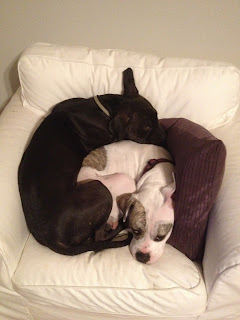 I considered taking them with me, but the runners would be meeting up near the off-leash area of Auditorium Shores, and they weren't ready for that kind of excitement. In the last moments I had to make my decision, I heard the thunder again. Nope. No more running. I checked the weather, and, well: 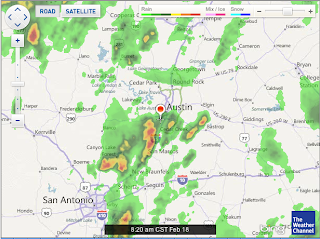 I made my final decision and stood to put my computer back on the counter. A wave of shock ran from my hips to my heels and back again. No more miles for me today. The correct choice had been made.

There are few things in this world that can actually be described as "once in a lifetime" opportunities. I plan on running with legendary runners again. I've only been a serious runner (again) for a little over a year, so I've got time to train with the best. For today, I'll take my personal victory of a long run in the rain, and I'll save the novelty for another day.

After all, they'll have this race next year, too.