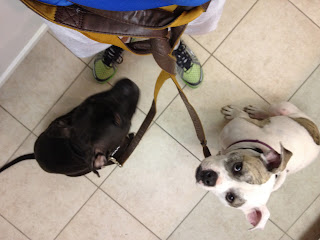 My bride is out of town for the next couple days, which means that I get to be in charge of the pups all by myself. Consequently, this puts me in charge of their morning routine and afternoon walk, which is usually no problem at all. However, this morning, my own routine was a little off.

I got home late last night, and I wanted to give the dogs a little time out of their beds, so I turned on the television. I found Batman Begins, and, well, that pretty much meant I was up until 1:00. When the alarm went off this morning, it was simply not happening. Challenge or not, I needed a little extra sleep in order to get through my day, so I took a couple extra hours. In doing so, I lost my window for a morning run.

The dogs and I spent most of the day working hard, but as 4:00 approached, I noticed they were slightly more rambunctious than usual. I had hoped, after my work day, to get out and do my run, but I knew that the pups needed some exercise and that I needed time to cook. There was no way to do it all. Or was there?

In a moment of pure inspiration, I decided that the dogs would simply have to come running with me. I've been feeling tired this week, so I decided to forego speed work this week and let my legs recover a bit, especially with a 16-miler on the horizon. Instead, I wanted to go for a smooth 4 miles, which made for a perfect group run distance. I tied both leather leashes around my waist, convinced myself that this was a good idea, and the three of us headed out the door.

The first quarter mile was an adventure, to say the least. They couldn't settle on which side they wanted to run, and on a few occasions, felt the best place to be was underneath my legs. Still, we forged ahead, and suddenly, they fell into step.

Running with one dog is usually difficult, but running with both of them turned out to be much, much easier. First, they wanted to race each other a bit, which meant that I didn't have to pull them along behind me (until we headed back up the hill). Then, they kept one another in line. There was a bit of side-to-side motion that made it a little challenging, but overall, I was quite simply amazed at how great they were.

I don't think I'll be doing this too often. After all, it's best not to tempt fate. Still, sometimes it's nice to look at two choices and suddenly think, "Hey, I can do both!"

Especially when it leaves you time to cook dinner.