We bought our house for the kitchen.

While at a performance in late summer last year, I got a text from my wife informing me that she'd found our house. When I got home that night, she started by showing me the kitchen. Too many weeks later, we'd moved in.

The kitchen was the big upgrade that was made to the house before it was sold, and what absolutely won us over was the island in the middle. This thing has more surface area than our first apartment's kitchen had floor space, without exaggeration. My brilliant chef of a brother is even impressed, which intimidates me a little bit. If I've got an awesome kitchen, I feel an obligation to use it to the best of my ability, and thus far, I really have had no ability.

Every couple weeks, however, I get an urge to be better, and I'm going through such a phase right now. The first big project of the week was chicken kiev. I've always been fascinated by stuffed chicken, and whenever I see that in a recipe, I have to give it a shot. So the other night, I made dinner. 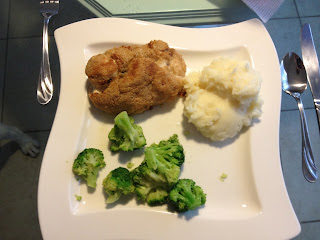 Not only is this wonderfully breaded chicken and fun side dishes, but on the inside of the chicken is an assortment of parsley, garlic, green onion and butter. 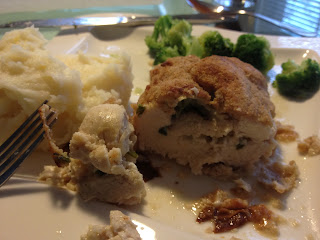 General opinion is that it was a success.

Dinner, however, has always been my only realm of cooking, so I decided to try something new. I decided to bake. I found a recipe for blueberry buckle, which is essentially a cobbler, with a little more of a bread texture. The picture looked too good not to try.

Given that I'm waking up at 6:00 every morning, I had a little time today. Usually, I meet my running partner at 8:30, but the weather was a little off this morning, so we decided to call off the workout. I still wanted to run, but I wanted to go at my usual time. With over two hours before I had anywhere to be, I figured it was as good a time as any to learn how to bake. Game on. 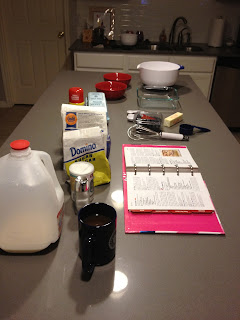 Sure, it took me longer than I anticipated, but I made it and it was delicious. Insanely so. While it was in the oven, I cleaned up my mess, actually washing the dishes by hand. After it finished baking, I went for my run. Then I cleaned up my back yard. That was followed with some upper body work and protein, a shower, and a load of laundry. My goal for this morning was to bake, and baking made me do everything else on my list. And it's only 11.

I could make some lame extended metaphor about how running is like baking. You know, take two cups of determination, a teaspoon of speed work, and slowly add 1/4 cup of distance at a time, cooking on low heat for 18 weeks, and let cool before serving. (Actually, I like that.) But that's not what this was about. I decided that I wanted to wake up at 6:00 every morning, and so far, I've done just that. Then I decided that wanted to bake, and I did that. Suddenly, setting small, attainable goals has led me to set more, and when I would normally still be in bed with a busy day ahead, I had already accomplished more than I normally do in an entire weekend.

Plus, I have baked goods. 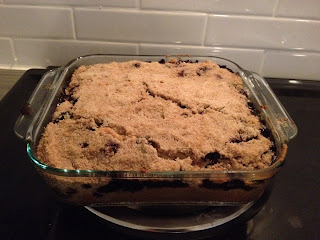 Email ThisBlogThis!Share to TwitterShare to FacebookShare to Pinterest
Labels: 4 Miles, Food, Other Hobbies, Waking Up