The gorillas are on the loose. 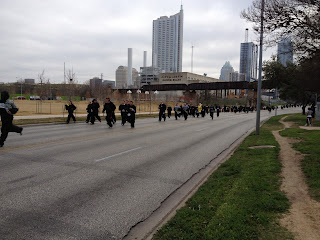 Today was the second annual Gorilla Run benefitting mountain gorillas. It's a little pricey for my taste (at $100 per entry for a 5K), but that cost includes the gorilla costume. Yes, every runner gets dressed up as a gorilla, and though most had lost their masks within the first mile or so.

As my running friend needed to switch our weekly run to Sunday this week, I got to do a long run by myself, so I decided to make it simple, and run to the lake and back. It gives me a round trip of just over 12.5 miles, which is only a little farther than I'd planned on running anyway. Despite the weather being a little colder than I had expected, I felt great heading down, making sure to keep my pace relaxed, since I knew that I'd have a tougher go of it heading back.

Once I reached the lake, I took a quick break to check my phone, as I remembered the run I had heard to be scheduled for the morning. Checking the time and route, I found out that they'd be heading my way shortly, so I headed across the bridge to watch the spectacle. And I wasn't disappointed.

Only a couple minutes after I arrived, a man rode by in a banana suit, warning the onlookers of the impending stampede. Then one, then three, then dozens of fur-clad runners followed up. But they weren't just runners. There were skateboards, bicycles (some built for two), unicycles (more than you'd think), and pets, also in costume. One was a tiny banana. Lots of bananas, for some reason. 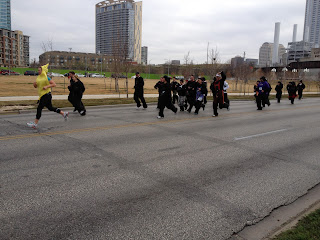 They had purses, medical scrubs, crowns, capes, business suits, wigs and aprons. They yelled and beat their chests and (when you could see their faces) smiled broadly. My personal favorite (as an Arrested Development fan) was a "never nude," a gorilla wearing only jean shorts.

I'm quite sure I've never seen a 5K that was as much fun as the one I witnessed today. It was certainly not competitive (though how fast can you really run covered in fur?), and that was what made it joyful. Between the few actually running as gorillas, the exceptional variety in costume, and the woman behind me simply yelling "Woo! Gorillas!" repeatedly, the whole scene had an air of absurdity, which made leaving it behind quite difficult. Still, I had only done half a run, and I still had to head back up the hill.

The local runs are the ones that will make my life more fun. Training 18 weeks for one race is simply too long. However, if I run a race a month on the way, it should be a lot more fun. I'm looking at the Austin Half, then the Capital 10K, and perhaps the Austin 10/20, but I'll have to pick and choose, as all this racing gets expensive.

And they don't all come with gorilla suits.