I don't always run with music, but when I do, I prefer Dos Equis.

Wait, that's not right. Forgive my cheesy Cinco de Mayo tie-in.
If I were the most interesting man in the world, I'm sure that my morning runs would involve some incredible mountain peaks or rainforest valleys, but that's just not the case. The vast majority of the runs I do involve the same first and last mile, as there aren't too many other options from where we live. Creating variation in the run is something I strive to do every day, because running should always be interesting.
There was a RW article a few months back about a guy who runs everywhere he goes in LA within a certain radius. He puts on his backpack and jogs to the store for a gallon of milk. If he's heading to a BBQ at his friend's house, he goes there on foot. It's an inspiring story, and what's most interesting about it is the fact that he never runs the same route twice. He created a game for himself, and by following his own rules, he made running interesting and entertaining, rather than just a drain.
I'd love to do something like this, of course, but I know that I need to get in my miles. What's more, with the early time I need to run and my propensity to choose dead end streets or roads without sidewalks, it's just not as practical. Maybe when I get my Iron Man (hint, hint) I'll be able to just run for a while without worrying about sticking to a planned-out route. For now, I make do by adding as much differentiation as I can into the few escape routes I have from the apartment. Today, for example, I went in the opposite direction of my usual 8-mile course, just to see everything from a different point of view. A small change, to be sure, but one that got me through the run by keeping my attention focused ahead.
Still, I knew that a further distraction might be needed, so I brought along some new music. I'd gotten a few albums by G. Love from my brother-in-law, and to date I had not had a chance to listen to them. Only last night did it occur to me that an hour long run might just be the perfect opportunity. I loaded everything onto the iPod this morning, and I listened - really listened - to the music during the run, which made it go by even more quickly. The relaxed tempo and acoustic guitar is in stark contrast to my other fun running music, Girl Talk, but in many ways, it has the same effect. It distracts my brain from any pain or tiredness in my legs, and it gives me something interesting to do with my thoughts. Today I didn't have a hero song. I had a hero album.
At some point, I still start to get tired, and I become distracted from the music. Of course I do. But for me, that point didn't come until I had about 2.5 miles left and I realized that I was still on a strong pace. I was even catching green lights for almost the entire time. This almost got me hit by a Mercedes, but I'm pretty sure she'll be more careful next time, if the look of abject terror on her face was any indication. Look both ways before turning right on red. That's all I have to say there.
Sure, I still got stopped at the devil light, and yes, I still had to do all my lifting when I got home, but I still had gas in the tank to burn as I ran up my own little Heartbreak Hill. 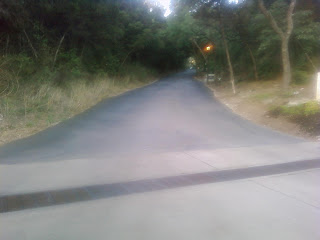 It looks far more intimidating in person, trust me. This is the driveway to my apartment complex, and though it's never a part of my miles or my time, I always finish by pushing up the hill. Why? Because if I can run this hill at the end, I can run farther next time.
This mental confidence should come in handy tomorrow when I try to run 17 miles. I've created an interesting, different, and as-yet unexplored course for the run, so I'm hoping it will keep my interest for the entire 2 and 1/2 hours I expect the run to take. I haven't decided if I'll be taking music yet, but I'm leaning towards no. If I won't have it on race day (which I won't), I shouldn't get used to it for my long runs now. No, I'll trust that the fascination with my new surroundings will be more than enough to hold my interest for the entire run, and I'll do my best to stick with the two goals that I ever have on runs of this length.
Finish, and don't get lost.