More Up Than Down

I haven't been on that many roller-coasters in my life, so to say that the last few weeks have felt like one rings a little less than true.

Also, I have a bit of a problem with the metaphor. People use it to describe their lives as full of high points and low points, but how they feel about those moments in their lives are the inverse of how they feel about them on the roller-coaster. The long, slow climb up is the boring part of the ride. I mean, sure, the anticipation is fun, but the moment at the top is not the reason you stood in line for 45 minutes listening to the 8-year-old in front of you cry while his 19-year-old uncle assures him that he'll love it.
The moment at the top is the brief second of air before the real fun starts, and that's the plummet to back to Earth. The rushing of the wind, the g-forces of the turns, the lurch in your stomach; these are the good things about amusement park rides. When talking about your life, it's very different. The high points can still feel like only a moment before you come crashing down, and you may still get that lurch in your stomach, but for a very different reason (though with perhaps the same result).
As such, I don't feel this is an adequate description of my last few weeks, which is sad, because I really wanted to craft some complex allusion about running on roller-coaster tracks, which some amusement park owner/running enthusiast would have read and afterward designed the coolest race course in history, though I'm sure they would have run into some issues with the corkscrew turns.
Let's just say that these last few weeks have been emotional, but I feel better for having had them. I'm almost caught up on my sleep, and most of the other things going on have come at least to a stasis if not completion. The only lingering issue for me is my stupid right leg which continues to be a jerk.
Seriously, leg, we've been over this. I just want to make you stronger, and you keep acting up. Let's knock it off, shall we?
I'll do my part. We get to take tomorrow off, and I even got you (well, my mother technically got you) a new pair of shoes: 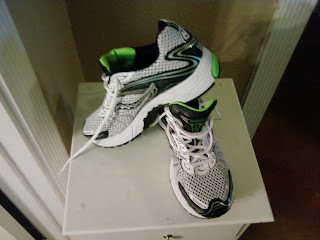 So, with a little more cushioning and shoes designed to do the work, I only had to run 3 miles today, thanks to the fact that I did not give up yesterday, for which I have been thankful since. As a result of catching up on sleep, I did not get up early, so it was to be an afternoon run, and someone decided she wanted to come with me. I told her that my leg was hurting and that it probably wasn't a good idea, and then she gave me this face: 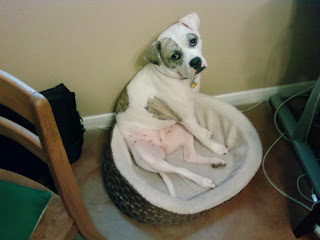 P.S. Notice how incredibly awkward she is when she sits.
So, we suited up and headed outside. I figured that at the very least, taking the pup with me would keep me distracted from any leg issues. I mean, I only had 5K to get through. Much to my surprise, she did not distract me at all. In fact, she was a perfect little running buddy the whole way. Sure, she saw a couple birds that she tried to chase, and she made a pretty good play for a butterfly, but other than that, she was right in stride with me the whole way. I couldn't have been happier!
Until 2.5, when it all went wrong again. I slowed down, dropped my shoulders, and focused on pushing myself forward with my toes, all of which helped a great deal. I barely noticed the last hill, and despite the fact that once again I was almost hit by several cars, we made it home safely and in great time.
With how often I talk about dodging traffic, I'm sure you think I'm playing human Frogger down here. Well, I'm really not. If I were not as concerned as I am about getting hit by a car, I'm sure I would have by how. Today's best example was a woman backing out of a driveway staring out her passenger side window with roughly 20 feet of visibility before the road bent around a building. There was absolutely no way she could see if traffic was coming, and yet she never even glanced at her mirrors, but kept right on backing down. I stopped to let her go, and then she stopped. I gave it a few seconds, and when there was no further movement (and no reverse lights), I continued, and was halfway past the bumper of her car when she started again. If we hadn't been moving quickly...
Anyway, look both ways. That's all I'm asking.
I'm very excited for tomorrow's rest because I actually EARNED it again. I'll set my alarm for a little later, and I'll let myself enjoy the extra sleep before the weekend's 6 miles at pace and 9 mile long. Tomorrow, I'll just make sure to stretch and hope that all this nonsense in my right leg has finally worked itself out.
Otherwise, I might have a bigger problem.
Wednesday's Run:
59 Degrees / Cloudy
3.3 Miles
23 Minutes, 29 Seconds
Posted by Jalex at 3:01 PM