Is it just me, or are squirrels just the stupidest animals on the planet?

As a road runner, particularly one who grew up in the Midwest, I've seen more than my fair share of roadkill during runs. It's never a pleasant moment, and it always makes me sad for the little guys, especially when no one cleans them up, like the armadillo at the bottom of our hill. Gross. 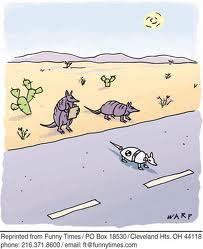 Some animals are simply too slow to make it safely across our massive freeways, but with squirrels, I have to believe that a good portion of the blame lies with them. These are quick little creatures who should have no issues with outrunning something that isn't chasing them. Their problem stems, it seems, from their inability to decide what the predator (be it car, dog, or runner) will do next.

And the interest and intelligence level of the squirrels varies depending on your region of the country. The critters on my college campus had grown so fat from being fed on football weekends that they mostly just sat around on benches waiting for someone to deliver their next meal. They probably told themselves that they were storing fat in their bodies for the long, brutal winter, but we all knew the truth. Those squirrels were lazy, pure and simple. They were safe, though, because no one's going to drive their car on a park bench, and they weren't about to start running across streets.

Living in DC, I noticed that the little rodents were much skinnier and far more daring. They'd get together in gangs of three or four and as soon as you were alone on the National Mall, they'd surround you, taking your food, money, and shiny objects. If you ate at an outdoor cafe, you couldn't take your eyes off the table for more than a few seconds, because if you did, you'd turn back to an empty plate, save the little acorn they left as a calling card.

Down here, though, I genuinely think that they're just plain dumb. My wife had mentioned that there were some squirrels taunting our pup from outside the windows of our apartment, and that on walks, they wouldn't back down from her, but rather stand and wait for the dog to make a decision. They do that little head fake that you've seen them do as they run to the middle of a road and stop, waiting for your car to make up its mind, and then they (almost invariably) choose the wrong direction, narrowly escaping disaster.

All of this could be forgiven when discussing squirrel versus car. I mean, the cars are so fast and huge, of course the little guys are going to freak out. But I'm sorry, squirrels, when a runner is coming up on you at an easy pace, and you cross the path a good fifteen feet away, there is absolutely no reason for you to suddenly turn around and charge at the runner. It scared me to death, and caused me to jump off the path, stepping awkwardly with my bad knee and cursing the little bugger who was now halfway up the tree.

I've got my eye on you, squirrels.

This little conflict tweaked my already unhappy knee, and led me to slow my pace just a little bit. Still, I felt pretty satisfied with the run as a whole. It was my slowest pace of this season for my shortest run. I resisted the urge to push myself, choosing instead to follow the advice of the Mr. Hal Higdon, who tells me that under-training is actually better than over-training. I'm doing some more for my joint health in general, so I'm hoping that by taking it relatively easy in the next few weeks, I'll be at full health before too long.

Now to do some icing and resting. I've got five miles in the morning, and with a knee that is being troublesome, the animal kingdom is evidently out to get me.