Taking some advice from a column posted by RunTex the other day, I decided that this morning would be a good time to take a look at the beginning of the actual marathon course. You see, while reading the article, I noticed that it cautioned those running next week's Austin marathon to beware of the first few miles, as they go uphill.

How bad could it be? Answer: bad.

At least, it would have been, if I had come across it on race day without any warning. I've driven down that street many times, and I've never noticed how steep the grade on it is. The good news is, with every uphill comes a downhill. That is, even though there's a pretty rough hill right at the start of the run, it's followed shortly by a long, substantial downhill.

I'm really glad that I took a look at that part of the course. I've been focusing on the end of the race, figuring that's where I'm going to have all my trouble, what with the 20 miles I've already run, but I need to watch out for the beginning of the course, too. If I don't pay attention to the level of difficulty early on, I run the risk of burning myself out early on, and at that point, it doesn't really matter what happens next.

Even facing the hills, I had a pretty strong pace for the whole run. There was only one point at which I had any issues, and it was up a VERY steep hill (not on the course) that I used as a short cut to keep my mileage down. And then Mumford and Sons came on the iPod.

Today, my hero song was Awake My Soul. It's not a fast song or by any means rock and roll, but it's got a great, full sound, and for a reason I can't describe, it was perfect for the moment. It brought my mind back into focus and got me up the hill.

And it was great that I had something to help me out, because as I ran, the temperature increased rather quickly. In fact, from when I left for my run to when I got back, it went up by 15 degrees. But as I made my turn and started the downhill stride, I let my mind wander to next week. I thought about what it's going to be like coming across that finish line.

When I completed my first marathon, I did it without training. It was spur-of-the-moment, and as a result, it didn't mean all that much. Yeah, it was great to have completed one of the most grueling physical challenges a person can do, but there was very little invested in its accomplishment. This time around, I've been training for 10 weeks. I've put time, effort and money into this thing, and when I cross that line one week from today, there will be a real sense of accomplishment.

It's so real now. It's on the ten day forecast (70/48, Scattered T-Storms - I'm not worried yet), it's got me running fewer and fewer miles, and they've begun to put up signs: 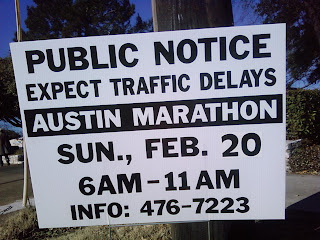 So, this week, I've got plans. We've stocked up on pasta, and I've got my energy supplements ready to go. I tried some PowerBar energy gels today, and they were great. I'm running at a steady pace for no more than 4 miles between now and race day. My two three-milers will be on the treadmill, making sure that I keep at my newly adopted 7:45 goal pace. My four milers will be with my reluctant running partner. 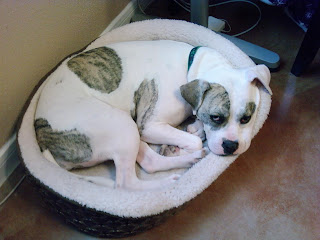 She's pretty excited about it.