As predicted, Austin was hit last night with 1-2 inches of snow. As expected, this caused the entire city to screech to a halt. But the trouble wasn't in the snow. It was underneath.

Usually Friday is my running day with the dog, and though she tends to slow me down and sometimes be a bit of a pain, I enjoy it. It's nice to get her the exercise she needs, and it's fun to have someone to talk to around mile 3. Given the very low temperature and the condition of the roads, we decided that today was probably not the best day for her to come with me. We think she knows she missed out with the way she's been pouting all day.

After a quick stop outside to see how she would react to the snow (she was largely unimpressed), I headed down the hill (carefully) and onto the street. What I saw really amazed me.

I've talked about the mile-long uphill that leads to our apartment before. Well, there is one stretch of about 100 yards that runs from the highway and past our complex's driveway that is downhill before the road curves and heads up again. It creates a bit of a valley, which I hadn't really noticed until this morning.

The roads were completely covered in ice that was probably .5-1" thick. Just one big sheet. There were six cars sitting there, stranded. They'd been stopped by the traffic light (or the car in front of them), which left them with no momentum and no traction. They were slowly sliding backward down the hill.

Now, one of my hobbies in Chicago was to go around the day after a big snow and push people out. You see, with snow, it's all about the angles. Your car can deal with it, you just have to make sure you're approaching it correctly. I was a little sad that I wouldn't get to do this in Austin (as it NEVER snows here), so I jumped at my chance. I went to the first car and started pushing, but I found out that there was no way for me to get traction on the ice. I eventually directed the guy to back down the hill and get up next to the curb where there was some pavement, and I pushed him up the slope.

Realizing that these folks would be fine if they didn't have to stop, my next choice was the person at the front of the line. If I could clear her out, then maybe everyone else could just use their momentum.

Unfortunately, she was dead in the center of the road, and there was absolutely nothing to grip. With three of us pushing, we couldn't move her. She thanked us, and I realized that they just needed someone to come with salt, and the woman had said her husband was on the way. I left it to him. I headed back to the point at which I'd left the sidewalk to start up again, and took one last look at the street. There was the first guy I'd helped. He's been stopped at the light and had slid back down.

So, I went for my run. Austin was like a ghost town. Very few people were even on the roads, and most that had ventured out wished they hadn't as they sat helplessly at the bottom of hills. 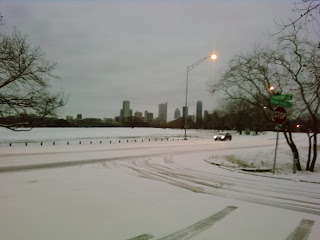 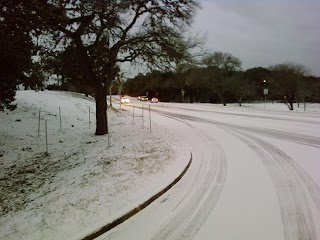 Already aware that there wasn't much I could do for these folks, I continued on, actually enjoying the run. It's really not that difficult to run in snow, up to a couple inches. Particularly if it hasn't been shoveled yet, the traction isn't too bad, again, as long as you come from the right angle. It was very quiet and peaceful running when no one else was out. I was careful, though, because I didn't want someone spinning out of control and taking me out.

I wish I'd had a better camera with me, because some of what I was seeing was just amazing. I did learn a few things, though. For one, ambulances and buses in Austin all seem to have 4-wheel drive. Other people are not so lucky. 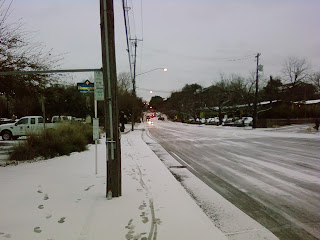 For another, a little thing like a freak snow storm doesn't stop the car wash from running. 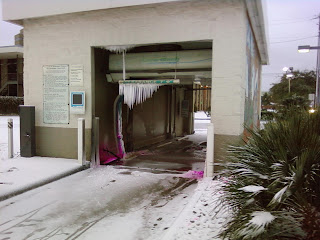 And finally, no one else appeared stupid enough to go for a run this morning. There are two sets of prints. Mine coming, and mine going. Also a bike. 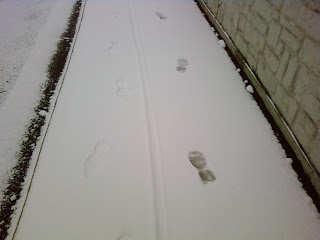 I climbed back up the hill, wondering if the woman I'd tried to help had gotten free, and then, suddenly, I remembered something. I still had, in our storage closet, the running spikes that I wore in high school. I've kept them all these years as nothing more than a reminder of when I went to state, and for the first time in almost 9 years, I needed them again.

As I neared the turn onto our road, someone honked at me. The woman had just gotten free, 40 minutes later. I smiled and waved, wondering if the problem had been fixed. It had not. There was a full-scale traffic jam, with two guys pushing the cars in front as best they could. I helped one little blue car right away, and then hurried up the hill to get my spikes before returning.

I have a point system with winter. Every time it makes me fall, winter gets one point. Every time I help a stranded car, I get one. Today, I took the lead. For more than an hour, I pushed cars up the hill, with the help of several other people, usually 1-2 at a time. The average helper lasted two or three cars before I pushed theirs up, and I probably had 8-10 cars that were just me. I was just beginning to wear out when a guy showed up with a pickup truck and chains to get the last two cars that were stuck on the hill. By that time there was enough of a path that people could go through solely on momentum, and the sun had begun to melt everything. I put out a lot of good Karma today, and I'm totally winning at Winter, though it did take a cheap shot at my shoes. 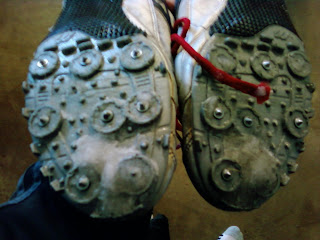